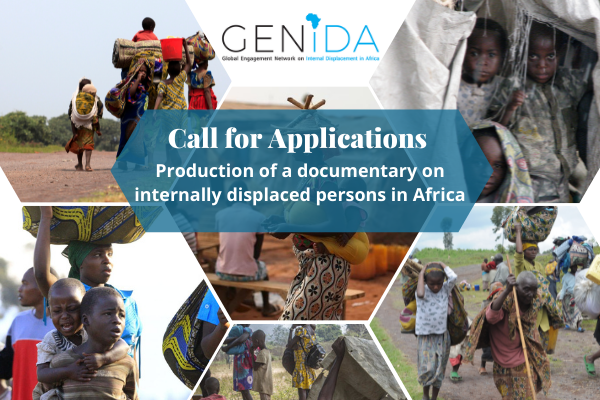 GENIDA is looking for a production studio or agency to produce a documentary in order to raise attention, advocate, and trigger local awareness and political discussion on the state of IDPs, especially the most vulnerable displaced persons, including women suffering from violence and separated and unaccompanied children and the need for their sustainable integration.

The film should be empathy driven, moving and inspirational produced in English, with French subtitles, at highest market quality standards, high-definition, fast paced and colourful, with clean stylistic touches told mainly from the perspective of IDPs with inputs from local communities.

The contractor will deliver the following:

Other appropriate formats that enables the films to be uploaded to GENIDA and partners’ websites, YouTube, flickers, etc in five working days from receipt of final Project team’s comments and clearance.

There will be two-step selection process. Based on the following evaluation criteria, three shortlisted team(s) with highest points will be invited to present their concept to the Project team. The winning offer will be selected after the presentation of the 3 teams and will be evaluated as follows:

Please note that all costs, including transport and translation, should be included in the total sum, no additional payments will be made outside of the total budget.

Bidding procedure and the deadline for submission of bid

The bidding proposal should include:

Please include budget categories (preparation, production, post-production and other) and specific subcategories.

All bids need to be submitted no later than 9th August 2021, at 17:00 in electronic version, to the email genidanetwork@gmail.com. Presentation of the proposals of the three shortlisted candidates will be organised and communicated accordingly. Only shortlisted contractors will be contacted.